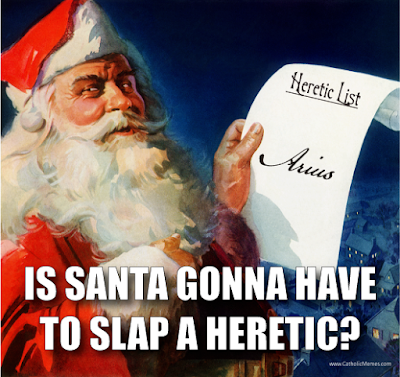 So I just found this interesting little nugget of history about Santa Claus (St. Nick)

In AD 325 Emperor Constantine convened the Council of Nicaea, the very first ecumenical council. More than 300 bishops came from all over the Christian world to debate the nature of the Holy Trinity. It was one of the early church's most intense theological questions. Arius, from Egypt, was teaching that Jesus the Son was not equal to God the Father. Arius forcefully argued his position at length. The bishops listened respectfully.

As Arius vigorously continued, Nicholas became more and more agitated. Finally, he could no longer bear what he believed was essential being attacked. The outraged Nicholas got up, crossed the room, and slapped Arius across the face! The bishops were shocked. It was unbelievable that a bishop would lose control and be so hotheaded in such a solemn assembly. They brought Nicholas to Constantine. Constantine said even though it was illegal for anyone to strike another in his presence, in this case, the bishops themselves must determine the punishment.

The bishops stripped Nicholas of his bishop's garments, chained him, and threw him into jail. That would keep Nicholas away from the meeting. When the Council ended a final decision would be made about his future.

Nicholas was ashamed and prayed for forgiveness, though he did not waver in his belief. During the night, Jesus and Mary his Mother, appeared,* asking, "Why are you in jail?" "Because of my love for you," Nicholas replied. Jesus then gave the Book of the Gospels to Nicholas. Mary gave him an omophorion, so Nicholas would again be dressed as a bishop. Now at peace, Nicholas studied the Scriptures for the rest of the night.

When the jailer came in the morning, he found the chains loose on the floor and Nicholas dressed in bishop's robes, quietly reading the Scriptures. When Constantine was told of this, the emperor asked that Nicholas be freed. Nicholas was then fully reinstated as the Bishop of Myra.

The Council of Nicaea agreed with Nicholas' views, deciding the question against Arius. The work of the Council produced the Nicene Creed which to this day many Christians repeat weekly when they stand to say what they believe.
Posted by Caleb at 5:56 AM