Night of Inspiration and Hope

Caleb
on 12:57 PM
No Comment
Now booking this event that will encourage and challenge your group. 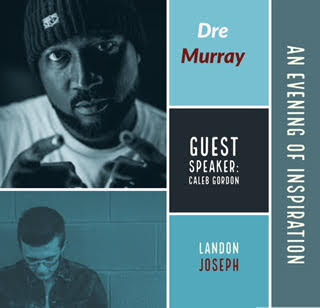 Dre Murray -
was born and raised in the South Park development within Houston, Texas.
In 2003, Murray released his first album entitled Project Ghetto and in 2008 an album called Manumit. Between 2010 and 2011, Murray along with Wit[who?] created a series entitled Hell's Paradise. In 2011, Dre Murray became part of the Christian hip hop collective W.L.A.K... In 2013, Murray released his second studio album, Gold Rush: Maybe One Day, with Collision Records.
He released, Southern Lights: Overexposed, with Alex Faith on April 28, 2015 by Collision Records as well as "Southern Lights Remix" also with Alex Faith and was produced by Cardec Drums and features John Givez, JGivens, Corey Paul and Tragic Hero and sampled "Lights" by Ellie Goulding.The success of those critically-acclaimed albums led to other high profile features for Dre on KJ-52′s Dangerous album and Lecrae's Don Cannon-hosted Church Clothes mixtape.He currently lives in Oklahoma with his wife and three children.


Landon Joseph is a Kansas raised Oklahoma transplant. He began his music career professionally as a singer/songwriter at the age of 18 when was hired on staff as a worship pastor at Vintage Church in Edmond, Oklahoma. But this wasn't where his heart for music began.He picked up his mom's old guitar at the age of 14 and fell in love with it. Since then, his desire to expand his musical world has grown beyond simply playing the guitar. He has learned to play many other instruments including the banjo, kazoo and glockenspiel.Landon draws much of his inspiration from people's lives as well as personal revelations he receives during his time alone with Jesus. He believes that any song written should in some waypoint back to the One who inspired it. As a follower of Jesus, Landon's desire for those listening to his music would be that no one is left wondering who the song is about and why it was written and that they would find themselves pondering the lyrics while also being filled with hope.

Caleb Gordon-
is a speaker that will engage your students from the moment he steps on stage.

He travels all over the country speaking to thousands of people each year in a variety of different venues and settings, but his number one goal is to share the hope that he found all those years ago.  The hope of knowing and loving Jesus Christ!
Posted by Caleb at 12:57 PM