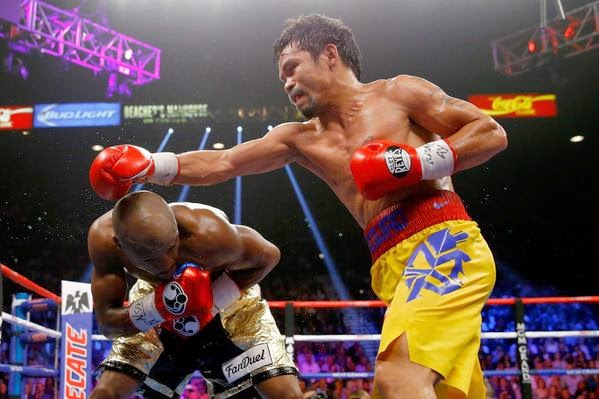 So tonight my facebook and twitter feeds was filled with rage. Tonight was the BIG boxing match between Mayweather-Pacquiao. I mean this thing was billed as the fight to transform the entire sporting world...guess what...SHOCKER...it transformed NOTHING! In fact it has now turned into a laughing fest... Look at some tweets I saw tonight...

After watching this fight tonight, I will never ever acknowledge boxing as a sport. Mayweather ruined it for the world.
— Nate Temple (@NateTemple5) May 3, 2015

A pay per view purchaser looking back at the money he spent on #MayPac: pic.twitter.com/k2cm3J5dkn
— NOT SportsCenter (@NOTSportsCenter) May 3, 2015

If you didn’t get your fill of action from #PacquiaoMayweather… Don’t worry! #NASCAR @TalladegaSuperS is on tomorrow 12pm ET on MRN! #AskMRN
— Motor Racing Network (@MRNRadio) May 3, 2015

The big winner tonight is people who didn't pay to watch that #PacquiaoMayweather
— Best Vines (@TheVineTime) May 3, 2015

There are people who placed massive amounts of hope and money in this fight/game...and now that's over it has let alot of people down. I'm going to say it. Sports makes a lousy god.

The only thing that is truly going to satisfy any of us is Jesus Christ.

When we put anything in the place of Jesus there is always going to be a ceiling that we hit. Because other things were never meant to fulfill us, only Jesus is going to fulfill and satisfy us…anything else is going to fall short. And I know that a majority of people don’t set out to actually do this…but when we let our guard down…that is when the enemy attacks and that is when we will end up falling into his trap. The enemy does not care how he gets you as long as he gets you! Honestly, if we focused that rage on our own personal sins and against the devil…our world would be a better place!

Here is how we find fulfillment! But seek first the kingdom of God and his righteousness, and all these things will be added to you. Matt 6:33
Posted by Caleb at 10:41 PM