Loading...
Home » »Unlabelled » New study names the 10 most post-Christian cities in the US

Caleb
on 12:58 PM
No Comment
-The Blaze-
The Barna Group, an evangelical research firm headquartered in Ventura, California, has ranked the top 10 most “post-Christian” cities in the United States, and most of them are in the northeast.
In fact, according to data released Tuesday, eight of the most “post-Christian” cities in the country are in New England, with Portland-Auburn, Maine, in the top spot. 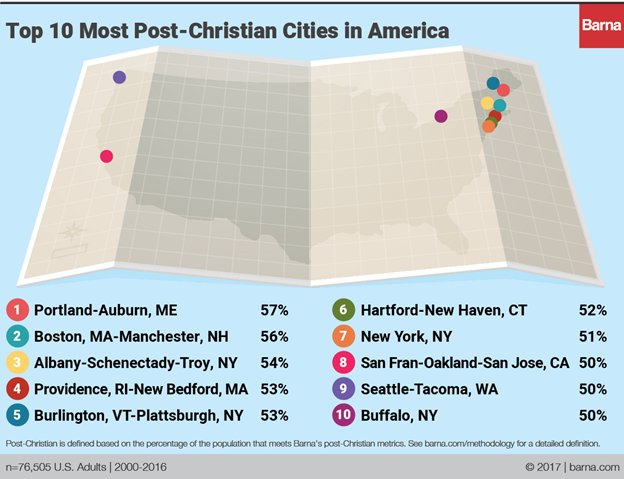 To qualify as “post-Christian,” respondents in the cities had to meet at least nine of the 16 identifying factors in Barna’s list, which included such categories as “Do not believe in God,” “Disagree the Bible is accurate,” “Identify as atheist or agnostic,” “Have never made a commitment to Jesus,” and “Disagree that faith is important in their lives.”

“These kinds of questions — compared to ticking the ‘Christian’ box in a census — get beyond how people loosely identify themselves (affiliation) and to the core of what people actually believe and how they behave as a result of their belief (practice),” a statement from Barna read. “These indicators give a much more accurate picture of belief and unbelief in America.”
Barna provided a top 100 ranking of the most “post-Christian” cities in the United States. Here are the top 10:
A Barna study from earlier this year found that San Francisco–Oakland–San Jose, California, is the most unchurched metro area in the country, with 60 percent of respondents saying they “have not attended a church service in the past six months.”
The evangelical research group noted the results of its most recent study are not all that surprising, given the “rates of church attendance, religious affiliation, belief in God, prayer and Bible-reading have all been dropping for decades” in the United States.
“By consequence,” Barna concluded, “the role of religion in public life has been slowly diminishing, and the church no longer functions with the cultural authority it held in times past.”
A Gallup survey from December found that 21 percent of Americans have no religious identity — up from the 15 percent of respondents who said the same in 2008. And in the 1940s and ’50s, only 2-3 percent of Americans didn’t report a formal religious identity.
The data also echoed Barna’s findings regarding church attendance. In 1973, 73 percent of Americans said they were members of a church, while only 56 percent said the same in 2016.
It should be noted that the least “post-Christian” city in the U.S. is Shreveport, Louisiana, which is also featured in Barna’s list of the most “Bible-minded” cities in the country. Barna describes “Bible-minded” people as those “who report reading the Bible in the past week and who strongly assert the Bible is accurate in the principles it teaches.”