Loading...
Home » »Unlabelled » 'MOTHER OF ALL BOMBS' US drops largest non-nuclear weapon in fight against ISIS in Afghanistan 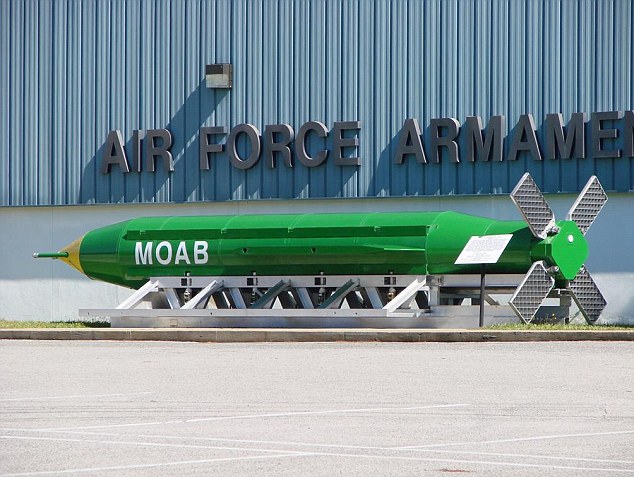 -FOX NEWS!
The U.S. military dropped the largest non-nuclear bomb in eastern Afghanistan on Thursday just days after a Green Beret was killed fighting ISIS there, a U.S. defense official confirmed to Fox News.
The GBU-43B, a 21,000-pound conventional bomb, was dropped on an ISIS tunnel complex in Nangarhar Province.
The MOAB -- Massive Ordinance Air Blast -- is also known as the “Mother Of All bombs.” It was first tested in 2003, but hadn't been used before Thursday.
The MOAB is so massive it had to be dropped out of the back of a U.S. Air Force C-130 cargo plane.
"We kicked it out the back door," one U.S. official told Fox News.
For comparison to the 21,000-pound MOAB, each Tomahawk cruise missile launched at Syria last week was 1,000-pounds each.
"As [ISIS'] losses have mounted, they are using IEDs, bunkers and tunnels to thicken their defense," Gen. John Nicholson, Commander of U.S. Forces in Afghanistan, said in a statement. "This is the right munition to reduce these obstacles and maintain the momentum of our offensive against [ISIS]."
The statement said U.S. forces took every precaution to avoid civilian casualties.

Lucas Tomlinson is the Pentagon and State Department producer for Fox News Channel. You can follow him on Twitter: @LucasFoxNews

We seem to be moving at a break neck speed toward some really spooky times.
We need to be paying attention to what is going on!