Our Phones Don't Advance Us, They Reveal We're Just Jerks. 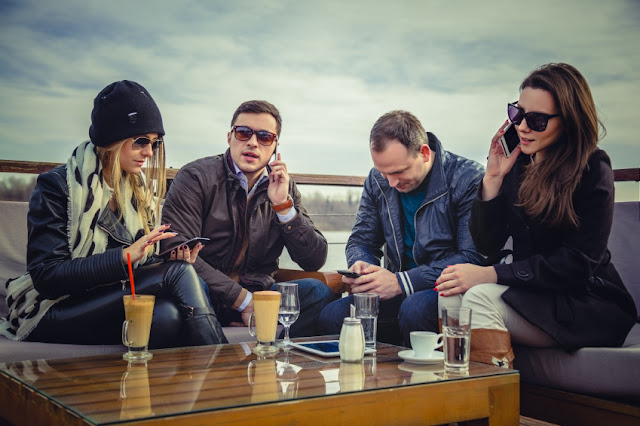 The world in which we live really is insane.  We see more than we've ever seen before in our lives.  We're more connected now than we've ever been.  Yet it seems like most everyone around us can't stand each other.  Research has shown in the last couple of years if we get an actual phone call from a friend it actually causes us anger and anxiety rather than joy and delight. That same research has shown that you would much rather receive a text from a friend than a phone call! Why? Because you can answer that text on your time rather than being bothered with having to have an actual conversation.  Because we are viewing our time as more important than someone else's time. Do you see how self-centered and narcissistic we've become as humans?  Our world, in spite of all of the advances in technology, has regressed when it comes to actual community.

Take notice, the next time you're sitting with a group of friends what are almost all of them doing?  We (and include yourself because you're guilty too)  are not engaged in a meaningful conversation with each other rather, everyone is glued to a phone.  I want you to also take notice the next time someone 'interrupts' you while you're phone or device.  I want you to see how you react.  Are you angered when you 'have' to be pulled away from that screen, or is there grace given to the person wanting your attention?  Most often we're angry.  Why?  Because we view our time as far more important than the other person's time.  And here is the thing.  I'm guilty of unplugging from reality and jacking into the matrix to escape.  So, know this, I'm preaching to me as much as I'm preaching to you.

It should not surprise or shock us that children are blowing each other away.  If we as a society are inconvenienced even a little bit we fly off the handle at each other.  Students say some of the cruelest things to one another all in the hopes of making a funny meme out of it.  We've created the monster and we are have given it a place to live in our houses.

No, I'm not blaming phones for our problems. They are simply barometers that tell us what's going on in our hearts.  Our hearts are the problem.  So I have diagnosed the problem, what's the answer. In short, it's living in a Gospel-centered lifestyle.  What does that look like?


1. Be Present With One Another.  Put someone's desires over yours.
Let each of you look not only to his own interests, but also to the interests of others.   Philippians 2:4
When you are with friends and family.  Be with them.  Engage with them.  Ask questions that require more than a YES OR A NO. When you begin to put someone else in front of you it really does transform so many things.  When you're looking at helping someone else's cause, rather than just your own something truly incredible happens.   Zig Ziglar once said: "You will get all you want in life if you help enough other people get what they want,"  the next time you're in a group of people look at how you can put their agenda ahead of your own.  Rather than telling people about all of the incredible things you've gotten done, ask about that other person's accomplishments.  See what happens.

2. Use language that builds up rather than tears down.  If you notice on social media people are quick to rip each other apart. Even if you are in a 'Christian social media' platform or room people are quick to rip each other apart.  It's very rare that people are trying to engage one another in order to see them reconciled, but honestly, we engage in the hopes of being proven right.  Take a look at this verse.
Let no corrupting talk come out of your mouths, but only such as is good for building up, as fits the occasion, that it may give grace to those who hear. Ephesians 4:29.
What would it look like if purposefully used language with one another that always had the intention of building one another up rather than tearing each other apart?  Proverbs 18:21 says that there is life and death in our tounges.  We really do need to make a conscious choice to use words that move us forward rather than drag us back.

3. Outdo one another, in showing honor.  We live in a world that loves to compete.  We love to try and outdo each other, we attempt to top everyone else.  If you tell a cool story, I've got a cooler story that will make your story look like a child's fairytale.  But when we have a Gospel-centered view of life we want to try and honor other people.  We want to show respect.  The next time you're with your crew look for ways honor someone or everyone in that group.  See how it changes the atmosphere.  And who knows it might be so contagious that everyone might start living their lives that way.
Romans 12:10 tells us this: Love each other with genuine affection, and take delight in honoring each other.  Like I said when we have a GOSPEL-centered view of life our priories change.


The Bible is full of stories of people who were engaged in their community with one another and if you notice those people, when they were present with one another had a sense of completeness. Because it was really not about them, but rather about JESUS the author and perfector of our faith.  Let's live our lives out this week in such a way that it catches on like wildfire and we start to see the KINGDOM in our communities!