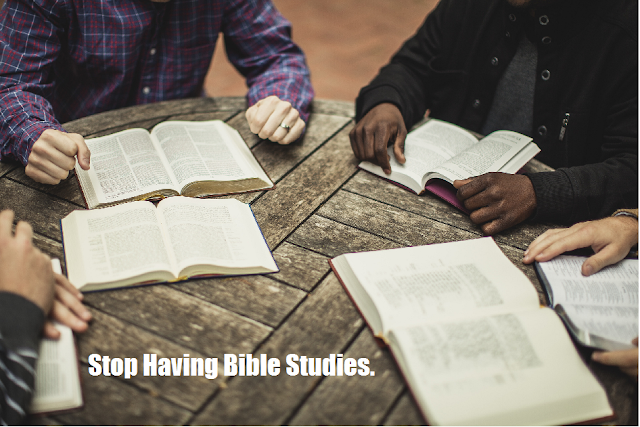 So over the past two years, I have been thinking...and sometimes that is a dangerous thing to do. I'm really trying to flesh this thing out. It's been something that I've seen in my own life and I'm struggling with it.   So hang with me as I talk this out.

I know so many men and women who are a part of multiple Bible studies.  They go to studies on Sunday mornings, Wednesday nights, and some even go to another midweek study.  Women's Bible studies, Men's Bible studies, couples Bible studies...the list goes on and on. There honestly is no shortage of Bible studies we can attend.   The thing that truly just blows my mind is that you'd think that with all of those Bible studies that we all are involved in and all of those hours we've spent together pouring over and talking about the Scriptures  we'd truly begin to see some type of really big change in our communities because of it, right?  Well, why then are we really not seeing anything different?  Let me explain further.

A majority of people who attend church are just as angry and bitter as lost folks.  We have husbands and wives that really are not loving each other like Christ loves the church.  We have children that are so disrespectful to any type of authority that it's just sickening.  But all the while we have so many of these people 'plugged into' a Bible study of some type.  So what is the problem?

The problem is not that there are not enough Gospel-centered Bible studies...it's that we are actively replacing action with consumption.  We think that if we just sit for thirty mins to an hour listening to the truths of scripture then that should be enough.   Check this verse out:

So whoever knows the right thing to do and fails to do it, for him it is sin. James 4:17

You see what is happening is that we are living in a replacement mentality. We are actually replacing DOING what God has called us to do for just reading and studying about it and thinking that is good enough.  We spend tons of time sitting in group Bible studies talking about how we should live as Christ followers.  What would happen if we started to have Bible DOINGS and actually living out the mandates of Christ?

Let me give you an example.
What would it look like if we, instead of doing another Bible study over 'NOT BEING ASHAMED TO SHARE THE GOSPEL' actually went out to the local public square and actually share the Gospel? Engaged people and talked to them one on one.

What would it look like instead of having another couple's Bible study that you planned a couple'ss MISSION trip in your city of state to go and actually do something together as a couple?  You see if you're both as a couple focused on a COMMON MISSION you don't have time to fight.  If you're both LIVING THE GOSPEL OUT TOGETHER, you won't argue you'll find ways to help and encourage one another.

Stop just agreeing and start doing!  Move in a direction and get out of your comfort zone!