Syrian Refugees, ISIS, and Why Our Response Might Be Wrong. 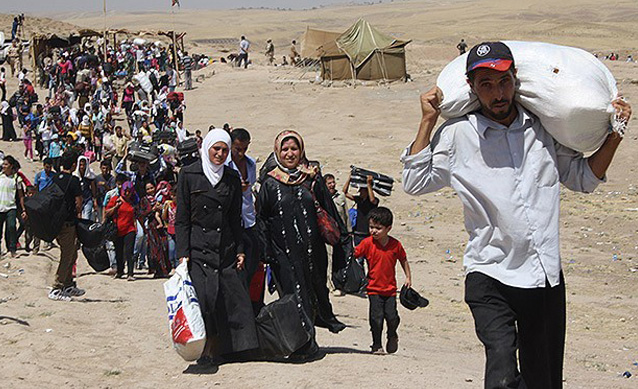 I got to thinking about the Syrian Refugee crisis that is happening in our country and the attacks of ISIS over this past weekend in Paris and my gut reaction was: 'KEEP THE SYRIANS OUT OF AMERICA!!!!'

Then I happen to go to a play called 'Jonah' this weekend....which in turn got me reading Jonah...in the BIBLE.  If you look at this we are just like Jonah...

Look at this:
Now the word of the Lord came to Jonah the son of Amittai, saying, 2 “Arise, go to Nineveh, that great city, and call out against it, for their evil - Jonah 1:1

He did not want to do that...he HATED the people of Nineveh...they were wicked evil terrorists who did horrible things.  He did not want God to have mercy on them...he wanted God to wipe them out.

We as American's don't like Islam...they are wicked, evil terrorist who do horrible things.  We want vengeance.  We want God to wipe them off the map.   Wait... look at what happeneed when Jonah went and preached repentance to the folks in Nineveh.


When God saw what they did, how they turned from their evil way, God relented of the disaster that he had said he would do to them, and he did not do it. Jonah 3:10

But it displeased Jonah exceedingly,[a] and he was angry. 2 And he prayed to the Lord and said, “O Lord, is not this what I said when I was yet in my country? That is why I made haste to flee to Tarshish; for I knew that you are a gracious God and merciful, slow to anger and abounding in steadfast love, and relenting from disaster. 3 Therefore now, O Lord, please take my life from me, for it is better for me to die than to live.”  Jonah 4:1-3

He was mad!!!!!   He did not want God to show those nasty terrorists mercy!  Does this sound familiar?  You see we want justice for everyone elses  sin but for our sin we want mercy.  You see here is the beautiful thing about  Jesus, He is a gracious God and merciful, slow to anger and abounding in steadfast love, and relenting from disaster.  That includes terrorists.  We need to make it our priority to preach the Gospel to them.


What needs to be done is we as Christians need to take our job seriously. We need to start being on mission and making the Gospel a priority, and I know what some will say...they want to kill us!  You're right they might just kill you.  ( Romans  8:36 -   As it is written, “For your sake we are being killed all the day long, we are regarded as sheep to be slaughtered.”)

36 Others suffered mocking and flogging, and even chains and imprisonment. 37 They were stoned, they were sawn in two,[a] they were killed with the sword. They went about in skins of sheep and goats, destitute, afflicted, mistreated— 38 of whom the world was not worthy—wandering about in deserts and mountains, and in dens and caves of the earth.

So yes we might get killed....but things just might turn out different.
Go back and read Hebrews 11: 32-35a

32 And what more shall I say? For time would fail me to tell of Gideon, Barak, Samson, Jephthah, of David and Samuel and the prophets— 33 who through faith conquered kingdoms, enforced justice, obtained promises, stopped the mouths of lions, 34 quenched the power of fire, escaped the edge of the sword, were made strong out of weakness, became mighty in war, put foreign armies to flight. 35 Women received back their dead by resurrection.

I think  that if we as Christians were pro-active and unafraid in our approach to sharing Jesus with ALL people we just might see revival rather than terror.  Instead of worrying about the Syrians being terrorists we need to look at this as  the MISSION FIELD is coming to us!  So as a result we need to be on mission and start sharing.  Start talking, start being a missionary where you are!!!

I understand that there is fear in all of this...don't get me wrong my gut says this is crazy, but most of the time what God wants from us seem crazy.  This is where we have to walk in Joshua 1:9

9 Have I not commanded you? Be strong and courageous. Do not be frightened, and do not be dismayed, for the Lord your God is with you wherever you go.”

Doing this just might change the world.
Posted by Caleb at 6:36 AM