Loading...
Home » »Unlabelled » Why Is Everyone Offended Over The 10 Commandments

Why Is Everyone Offended Over The 10 Commandments 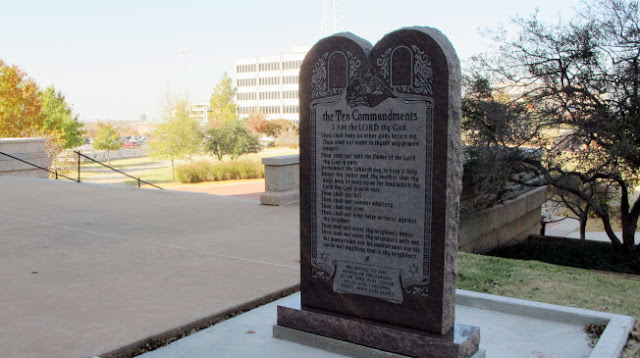 So the big news this week is that in Oklahoma (my home state) they are taking down the 10 Commandments that are at the Capital.  People that I know that are either Atheist or critical of Christianity were in full on celebration mode.

Got me thinking:  'Why is there so much fuss over this monument?  If a private group wanted to pay for and put up a statute of a Unicorn, no one would be upset.  I would think it was weird, but nevertheless it would be fine with a majority of people.

Why when the 10 Commandments are put up anywhere people start freaking out and demand that it come down?

I mean if you look at the BUILDINGS in our nations capital...they are filled with references to God.
Look at the buildings in our states capitals...they too have  references of  God.  Our country was founded upon CHRISTIAN PRINCIPLES.  That means the ideas upon which this country were set up were done so with the underpinnings of Christian values.

So why is it that so many people want these things taken down?
Why are so many offended by the commands that are in the Bible?

Take a look at some of these verses:

For the word of the cross is folly to those who are perishing, but to us who are being saved it is the power of God.  1 Cor. 1:18

So the honor is for you who believe, but for those who do not believe, “The stone that the builders rejected has become the cornerstone,” and “A stone of stumbling, and a rock of offense.” They stumble because they disobey the word, as they were destined to do. 1 Peter 2:7-8

So why are they offended?
Because this word/law shows us for who we really are.  We are sinful and dirty and in need of a savior.  And honestly people don't really like that.  People don't like being told they are wrong, shoot.  I hate being told I'm wrong, but sometimes it is necessary.

Honestly, people are not upset with this monument because it's a constitutional issue... people are upset about the 10 Commandments, because it's a moral issue.   Their sin is exposed, and they don't like it.  So instead of dealing with and repenting of their sins...they fall more deeply in love with their own lustful desires, and push the God of the universe further and further away from them so that they can continue in what they want to do.

I want you to see something that is truly terrifying and extremely sobering.

8 And then the lawless one will be revealed, whom the Lord Jesus will kill with the breath of his mouth and bring to nothing by the appearance of his coming. 9 The coming of the lawless one is by the activity of Satan with all power and false signs and wonders, 10 and with all wicked deception for those who are perishing, because they refused to love the truth and so be saved. 11 Therefore God sends them a strong delusion, so that they may believe what is false, 12 in order that all may be condemned who did not believe the truth but had pleasure in unrighteousness.   2 Thessalonians 2:8-11

So when people continue to WANT to be away from God, and hate his law...God will help them along with this process.  He will cause these people to believe a lie, because they love their sin more than they love God.

The only way we get right with the God of the universe is we confess and repent of our sins, and we walk down a path that pursues Jesus Christ!

My heart pleads with you today...confess and repent and follow Jesus!  He's the only way!
Posted by Caleb at 6:54 AM