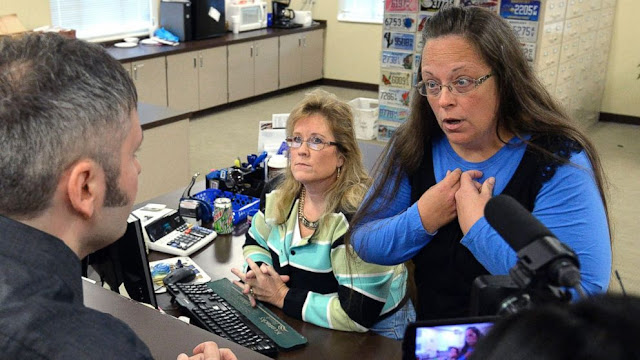 ASHLAND, Ky. — A federal judge here on Thursday ordered a Kentucky clerk jailed for contempt of court because of her refusal to issue marriage licenses to same-sex couples.


I knew this would be coming.  I CALLED THIS!! This is a transitivity!  If this was a Muslim clerk who was not issues the marriage license we'd hear nothing about it.  Even though Muslims are throwing gay couples off of towers in the middle east. The media paints Christan as evil and wicked...when all we are doing is standing by our believes!  Christians need to stand up or it's going to go worse!


I said back at the beginning of summer:  people who view homosexuality (or anything else sinful for that matter) as wrong will be villainized and treated as a criminal. Freedom of speech and thought will be something of the past once this is legalized.