Caleb
on 10:02 AM
No Comment
Isa 17:1-Isa 17:3 NIV A prophecy against Damascus: “See, Damascus will no longer be a city but will become a heap of ruins. The cities of Aroer will be deserted and left to flocks, which will lie down, with no one to make them afraid. The fortified city will disappear from Ephraim, and royal power from Damascus; the remnant of Aram will be like the glory of the Israelites,” declares the Lord Almighty.

So when I saw this news report, this verse came to mind.  I think what we are seeing in the Middle East is prophetic in nature.

With rows of crumbling buildings stretching to the horizon and not a soul in sight, these apocalyptic scenes reveal the shocking legacy of the Syrian war.
Once home to spectacular ancient landmarks and a bustling population, the Damascus neighborhood of Jobar now lies in ruins.
As this dramatic drone footage shows, all that remains are bombed-out homes, decaying concrete and deserted streets as far as the eye can see. 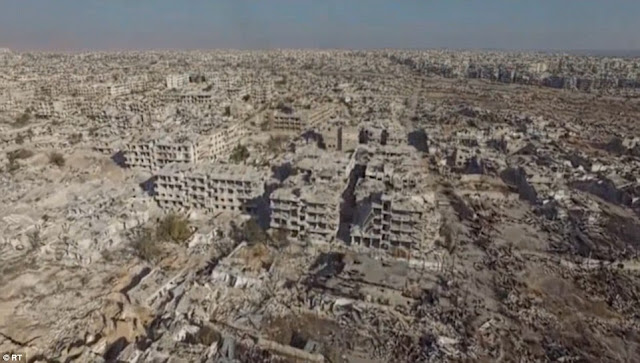 We are living in an amazing time, and now more than ever is when we as believers should be chasing Jesus and sharing the Gospel.


The area is strategically important because it is located next to the Abbasid Square roundabout which leads to the center of the Syrian capital, it was reported by RT which obtained the aerial video footage. Before the civil war broke out in 2011, the neighborhood was home to 300,000 resident and boasted several ancient landmarks including the Jobar Jewish synagogue. It also housed the Grand Jobar Mosque, the tomb of the Prophet Elijah and ancient baths built during Ottoman era.

We as believers also should be in prayer for the people who live here. May God bring peace this area!
Posted by Caleb at 10:02 AM