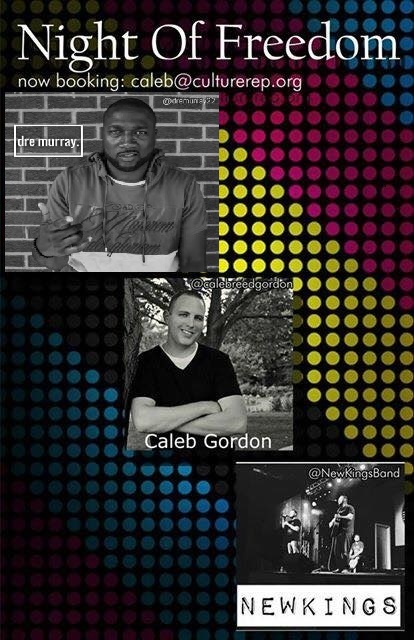 We are excited to announce this little event.   We are now booking the "NIGHT OF FREEDOM" Event.  It's a one night event that brings a little bit of everything.  Praise and worship, hip-hop, and the GOSPEL.

Who is apart of this event?

Dre Murray:
Dre Murray was born and raised in the South Park development within Houston, Texas.

In 2003, Murray released his first album entitled Project Ghetto and in 2008 an album called Manumit. Between 2010 and 2011, Murray along with Wit[who?] created a series entitled Hell's Paradise. In 2011, Dre Murray became part of the Christian hip hop collective W.L.A.K... In 2013, Murray released his second studio album, Gold Rush: Maybe One Day, with Collision Records.

The success of those critically-acclaimed albums led to other high profile features for Dre on KJ-52′s Dangerous album and Lecrae's Don Cannon-hosted Church Clothes mixtape.

He currently lives in Oklahoma with his wife and two daughters.


NewKings
NewKings is a Christian acoustic band traveling the United States providing live performance music as well as leading worship for various events and churches. Their powerful vocally driven style is well received by audiences all over the country.  They have opened for such acts as Shane and Shane, Joe White, and Andy Mineo.

Caleb Gordon
‘Caleb Gordon is a new voice that speaks the timeless truths of God’s Word for a new generation.’ (Nick Garland, Pastor)

Caleb has a desire to help people. He knows everyone carries a hurt with them from their past, and most people still just want to be loved by someone. He has two goals: #1. To bring glory to the name of Jesus Christ! #2 is to make sure everyone understands that Jesus LOVES THEM! He speaks to thousands of people all over the country each year, at camps, retreats, school assemblies, churches, colleges, rallies, and special events.


A small devotional thought from Caleb:

This event would be perfect for your church, youth, or retreat.  You will be inspired, challenged and encouraged to press into and follow Jesus Christ. As well as be a light to a dark and depressed world.

You can book this event by clicking this link: